Dr. Kjell Norwood Lindgren will be the keynote speaker this year.

The Astronaut Ellison S. Onizuka Memorial was chartered in 1986 to uphold the memory of Astronaut Onizuka and to inspire future generations. One of his many messages to young students was: “Your vision is not limited by what your eyes can see, but by what your mind can imagine.”

This year marks the 29th anniversary of the Space Shuttle Challenger tragedy in which Astronaut Ellison Onizuka perished along with six other crew members. This annual event honors Onizuka’s memory and is dedicated to his dream of inspiring the youth of America to strive for and achieve their career goals. This day is designed for serious-minded science students in grades 5 through 12. Reservations are required to attend this FREE event. See below for more information. 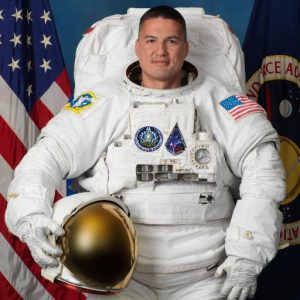 Lindgren was born in Taipei, Taiwan in 1973 before moving to the Midwestern United States, but he spent most of his childhood in England. He attended Lakenheath High School for a year before moving back to the United States and graduating from James W. Robinson Secondary School in 1991. After entering the United States Air Force Academy, he joined the Air Force Parachuting Team. In 1995, he received a bachelor’s degree in biology with a minor in Mandarin Chinese from the United States Air Force Academy. In 1996, he received a masters of science in cardiovascular physiology from Colorado State University (CSU), in part for his work completing cardiovascular countermeasure research at NASA’s Space Physiology Lab. He also received a doctorate of medicine from the University of Colorado in 2002, and went on to complete a three-year residency in emergency medicine at Hennepin County Medical Center in Minneapolis, MN. In 2006, he completed a post-doctoral fellowship and master of health informatics (MHI) at the University of Minnesota. He also completed a master of public health at the University of Texas Medical Branch in 2007 and a residency in aerospace medicine in 2008.
He began working for NASA at the Johnson Space Center in 2007. He went on to support ISS training operation at Star City, Russia and became the deputy crew surgeon for STS-130 and Expedition 24. In June 2009, he became a member of NASA Astronaut Group 20 and completed his two years of training in 2011. Following training, he worked in the Spacecraft Communicator and Extravehicular Activity branches of NASA, and he was the Spacecraft Communicator lead for Expedition 30. In 2013, he received training at the Gagarin Space Center which allowed him to serve as part of the backup crew for Expedition 42/Expedition 43 which launched on Soyuz TMA-15M.[5] He was later assigned to Expedition 44/Expedition 45 as a flight engineer and mission specialist which was launched to the ISS aboard Soyuz TMA-17M on July 22, 2015.[4] This was his first visit to the ISS.[6] He returned to Earth on December 11, 2015.[7]

Lindgren is married to Kristiana Lindgren and has three children. He has said that he enjoys running, SCUBA diving, reading, movies, photography, amateur astronomy, working with computers, and church activities. Lindgren is also a science fiction fan,[9] and in 2015 was a Special Guest at the 73rd World Science Fiction Convention while aboard the ISS.[10] He participated in the Hugo Award ceremony as a guest presenter via videoconferencing, announcing Cixin Liu’s win of the 2015 Hugo Award for Best Novel.  Lindgren was a Boy Scout and even made it to Eagle Scout. During the 23rd World Scout Jamboree in Japan in 2015, Lindgren talked to a small group of international scouts via radio from the International Space Station. The scouts asked him various questions about daily life at the Space Station and space.[12] 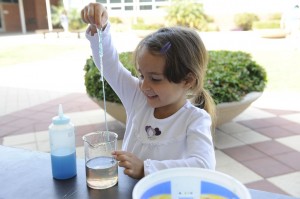 Free Lunch to the First 800 Students

Additional lectures and workshops will be available to introduce students of all ages to science, scientific investigation and scientific projects.