The Ellison Onizuka Memorial Committee stands against all hate crimes. The recent hate crimes and murders committed against the AAPI community are no exception. This organization was founded on the accomplishments and legacy of an Asian American hero. We condemn xenophobia and racism, instead, we need to celebrate and honor the AAPI community and other communities of color.

“Your vision is not limited by what your eyes can see, but by what your mind can imagine. Many things that you take for granted were considered unrealistic  dreams by previous generations. If you accept these past accomplishments as commonplace then think of the new horizons that you can explore.” -Ellison S. Onizuka

Onizuka Space Science Day is dedicated to the memory of the seven Challenger astronauts, who on January 28, 1986 lost their lives in pursuit of their dreams.

Their courage and ambition continues to inspire all. 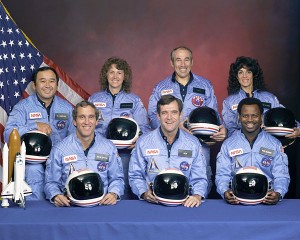 Jan. 28 marked the 35th anniversary of the accident that took the lives of Ellison Onizuka and six crewmates. In Little Tokyo, the monument dedicated to the crew of the space shuttle Challenger attracted more attention than usual because of a large wreath placed next to it — an annual tradition. The model was built in 1990 by Isao Hirai, president of the Scale Model Company in Hawthorne. “ He basically obtained the specifications from North American, who built the shuttle,” Murakoshi said. “This model is to (one-tenth) scale, and the paint that you see is the exact paint that you would have seen on the Challenger …He noted that astronauts who have seen the model say it is “exactly like the Challenger was at that time.”

Murakoshi, who has been on the 13-member board since 1994, inspected the monument along with Vice President Ted Tashima and Treasurer Herb Omura, both of whom are original board members.

The original president, Matt Matsuoka, knew Onizuka and his family personally. He was invited to witness the launch of the Challenger but was unable to attend.

Like the Onizuka Memorial Committee on Hawaii’s Big Island, the Los Angeles group sponsors an annual Space Science Day for young people during spring break. It started at University of Southern California and was moved to El Camino College in 1999.

“Our primary intent for having Space Science Day is to follow Ellison Onizuka’s dream,” Murakoshi explained. “He wanted to give the message to the young kids that no matter how large your dream is, it’s always achievable. He wanted them to get very interested in science, technology, so we decided that we should have a conference where we can invite the kids.

“We have approximately 1,000 students attending at El Camino College, and we have various breakout sessions covering various technologies and science. We always have a guest astronaut from NASA in Houston. We also have astronauts from the Japanese space agency, JAXA. They … talk about Ellison, talk about the space program. Then we have a breakout session where the students in attendance can speak directly to the astronaut.”

Make your life count – and the world will be a better place because you tried. 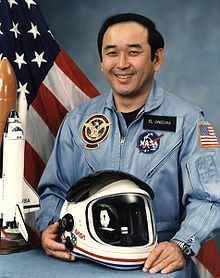