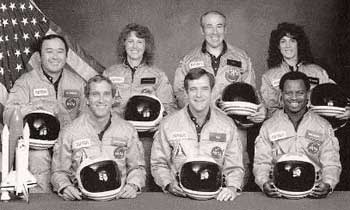 Space Shuttle Challenger ( NASA Orbiter Vehicle Designation: OV-99 ) was the second of six space shuttle orbiters to be put into service by the National Aeronautics and Space Administration ( NASA ). The shuttle was built by Rockwell International Space Transportation Division in Downey, California. The initial launch of Challenger occurred on April 4, 1983 and had completed nine missions. On January 28, 1986, during the tenth mission, STS-51-L was launched from the NASA Kennedy Space Center in Orlando, Florida. The shuttle disintegrated 73 seconds after launch killing all seven astronauts on board. This launch was significant in that the NASA Teacher in Space project was to be initiated.

The Story of the Challenger Space Shuttle

On January 28, 1986, the seven crewmembers of the Space Shuttle Challenger “Teacher in Space” mission, scheduled to be the 25th space shuttle mission in American history, set out to broaden educational horizons and advance scientific knowledge. Their mission exemplified man’s noblest and most wondrous qualities — to explore, discover, and teach with the aim of inspiring future generations to push the boundaries of contemporary knowledge. Each member of the Challenger crew contributed unique attributes and displayed remarkable levels of enthusiasm, integrity, and dedication. The Challenger mission was highly publicized due to the addition of crewmember Christa McAuliffe, a high school teacher who was chosen from more than 11,000 applicants to be the first civilian in space. Hawai‘i-born astronaut Ellison Onizuka also garnered special recognition for his distinction as the first Asian astronaut in space.  Read more about The Crew.

According to NASA’s Report of the Presidential Commission on the Space Shuttle Challenger Accident, the accident “was caused by a failure in the joint between the two lower segments of the right Solid Rocket Motor.” More specifically, investigators discovered that the seals intended to prevent hot gases from leaking during the propellant burn of the rocket motor had degraded and become unsafe.

In the wake of this tragic event, Challenger surviving families together created a fitting memorial that would serve to perpetuate the astronauts’ mission to seek and discover the hidden knowledge of space. In April of 1986, the Challenger Center for Space Science Education was founded in honor of the fallen Challenger crew. In August of 1988, the first Challenger Learning Center opened its doors in Houston, Texas, providing a progressive learning environment where young space lovers could explore their curiosities.

The creation of a network of Challenger Learning Centers was more than just an educational experiment; it was an investment in the development of the character and competence of our nation’s youth.