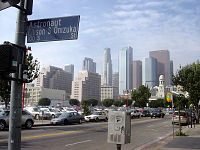 Subsequent to the Space Shuttle Challenger mishap in 1986, the City of Los Angeles, California renamed a city street that extended through Weller Court, a commercial district in the Little Tokyo area, as the Astronaut Ellison S. Onizuka Street. In attendance at the dedication ceremony  were his widow, Lorna Onizuka, from Houston, Texas; mother Mitsue Onizuka; brother, Claude and his two sisters, Shirley Matsuoka and Norma Sakamoto, and their husbands from Hawaii. Also in attendance were three astronauts who were Ellison’s crew members from his first flight: Loren Shriver, Jim Buchli and Gary Payton; and a number of close friends of Astronaut Onizuka from Hawaii. A dinner was held at the Beverly Hilton Hotel after the ceremony.